Believe it or not, but sourcing the pedals I like was quite a quest. So, when I finally found the design that I like, there was a problem – usually you get two identical pedals, for the clutch and the brake and one accelerator pedal with different design. But with OMP you get all different pedals, so I ended up with buying two sets.

The first mock-up – I intended to use the long one as a foot rest but eventually dropped the idea. 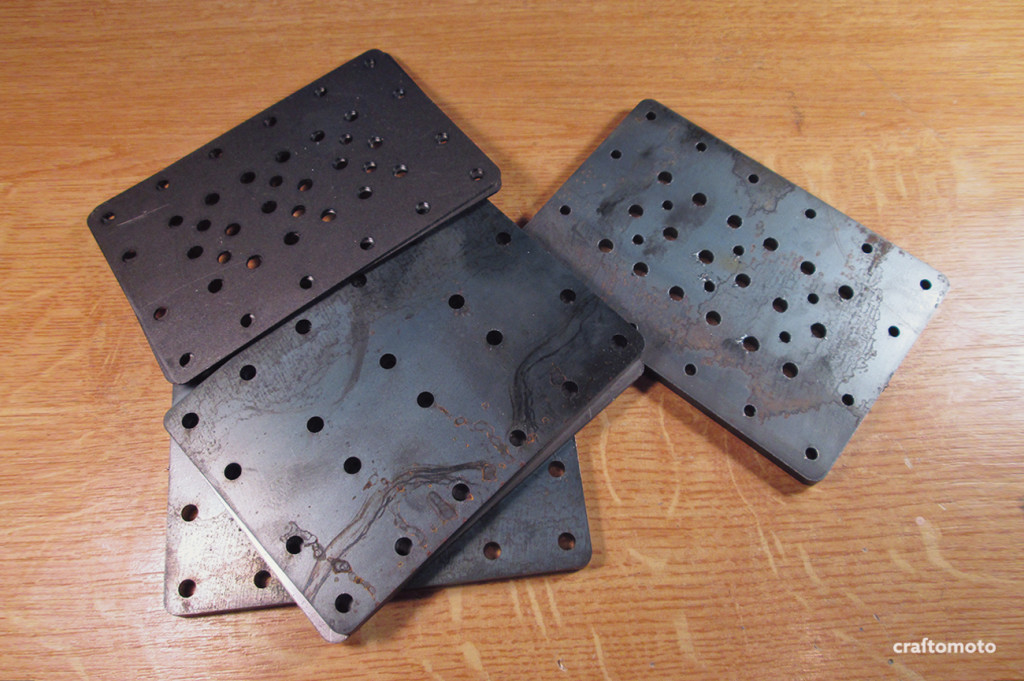 Since I won’t use pedals for racing and I want to have a good traction even with wet shoes, I decided to create a set of anti slip dimples, which required designing and fabricating the rubber mold. Also, I wanted to produce only a couple of dimple plates, so a multi layer laser cut plates were the best option for a cheap mold. 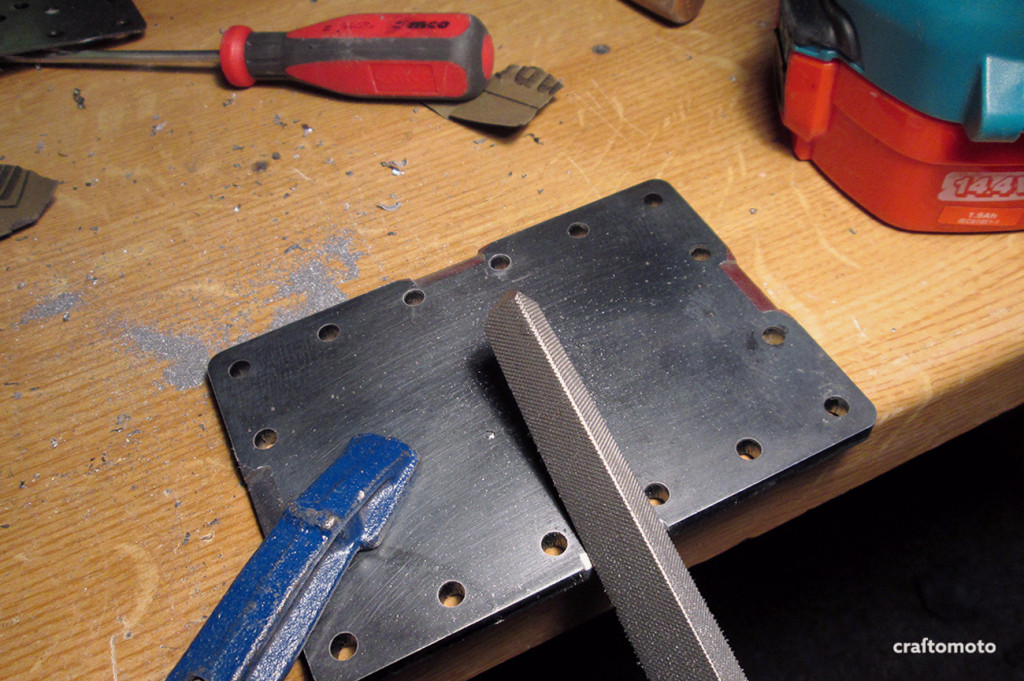 Also, in the process of molding, the top of the mold can get stuck sometimes. I made a couple of recesses, so it can be pried open. 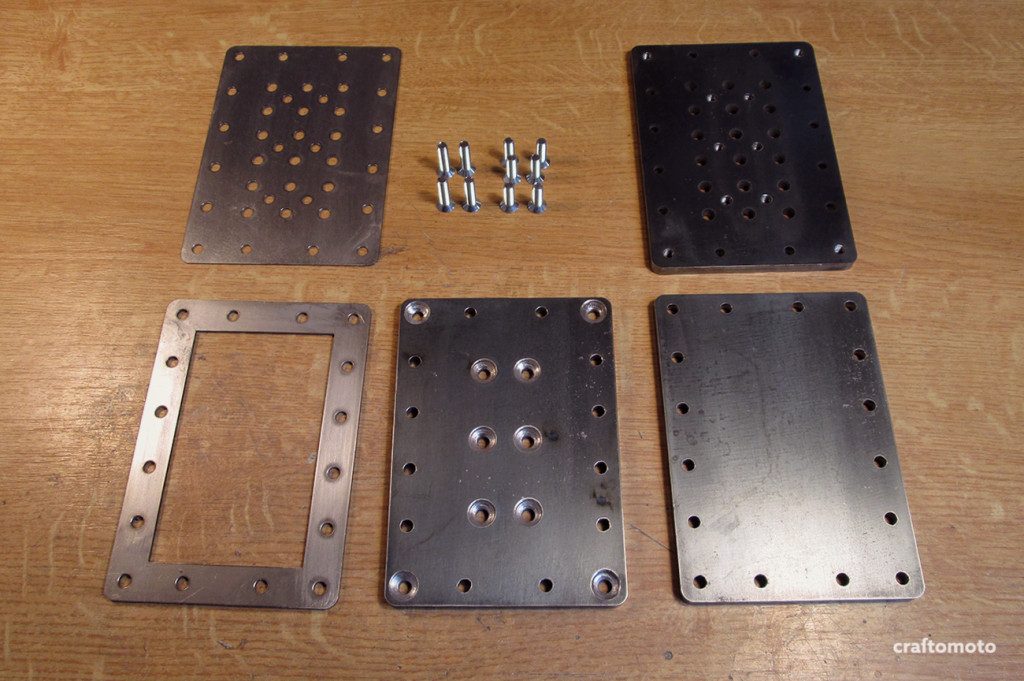 After some thread cutting, the mold was ready for the assembly.

The excess of the bolts were sawed off. 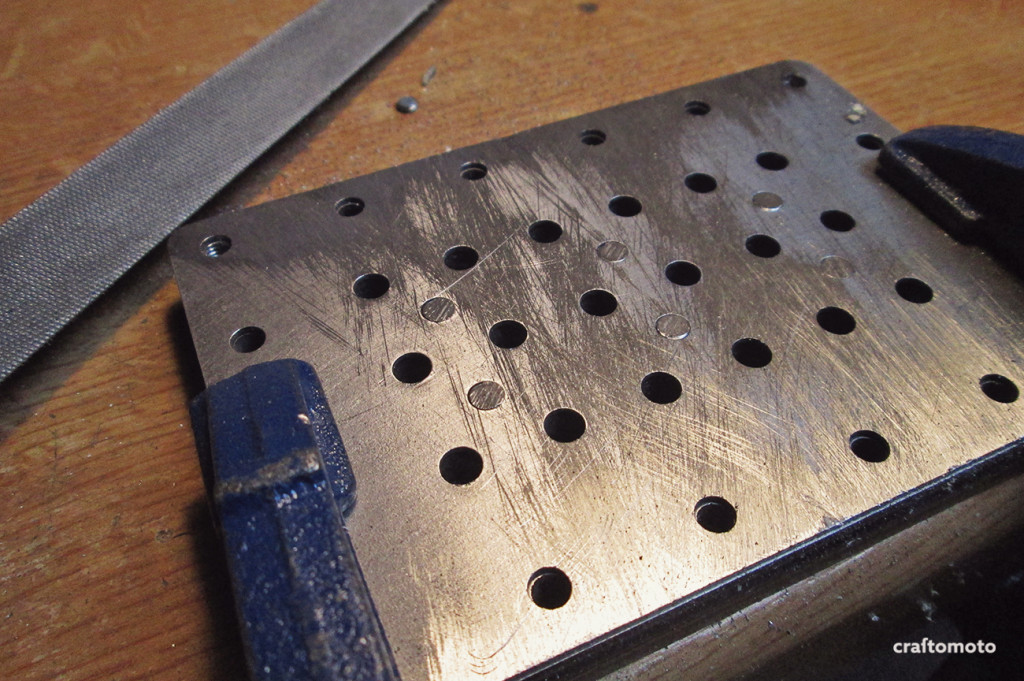 Everything was cut and filed, and later on sanded with fine sand paper to minimize “sticking” of the rubber while molding. 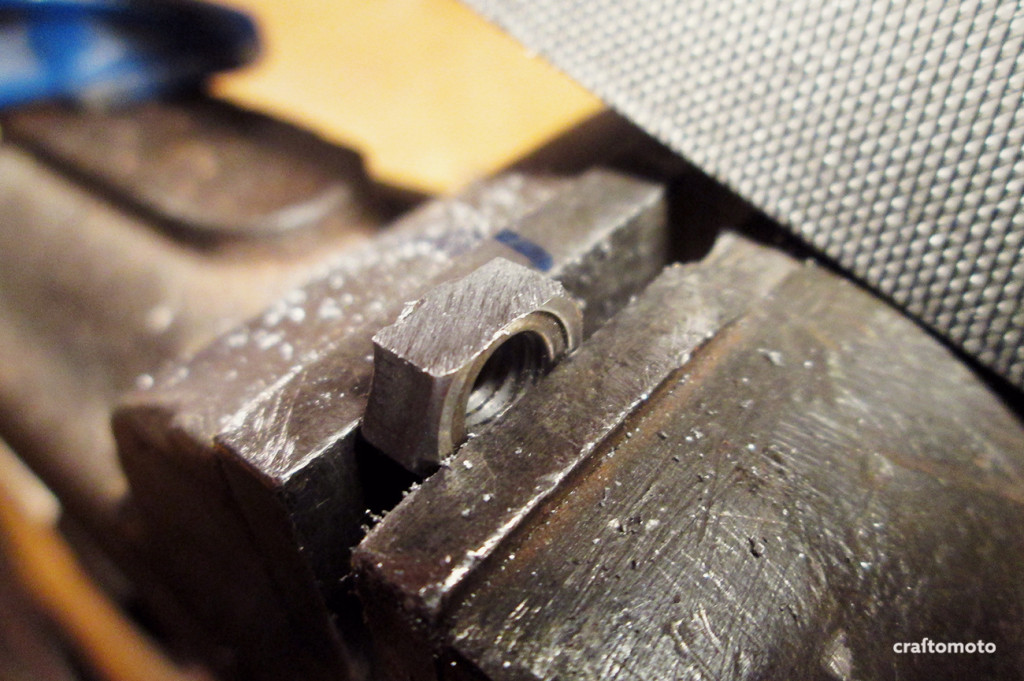 I also started to tackle the problem of attaching the pedals to the levers. 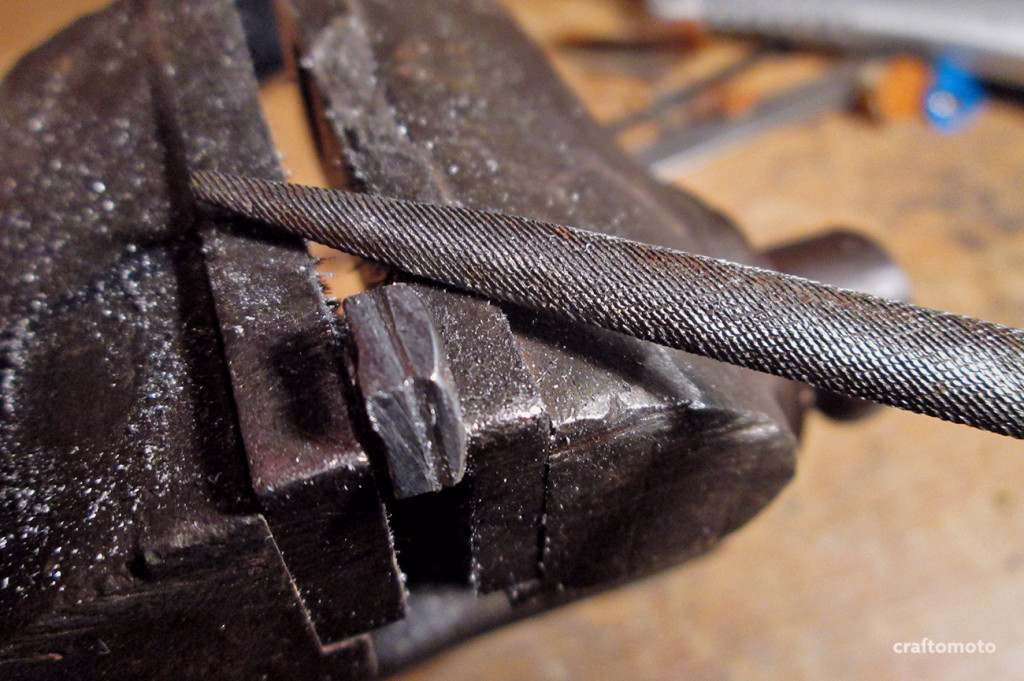 The nut was filed and “roughened”, so the epoxy resin in the next step can have a better adhesion.

They were placed in their locations and glued with epoxy resin. 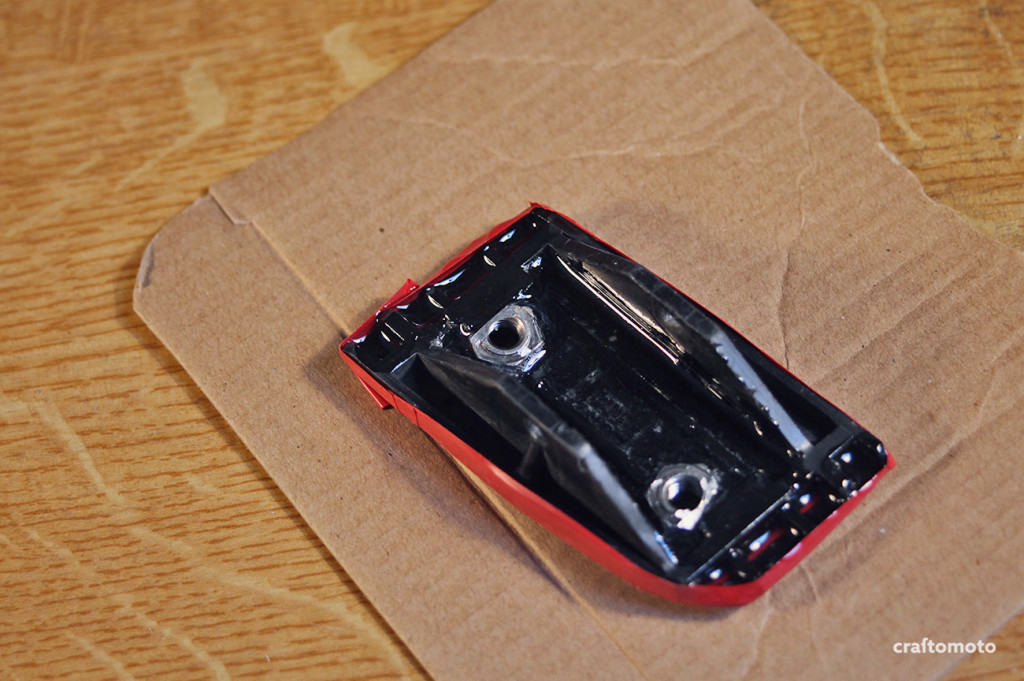 I also filled all underside with epoxy resin to get some extra rigidity. 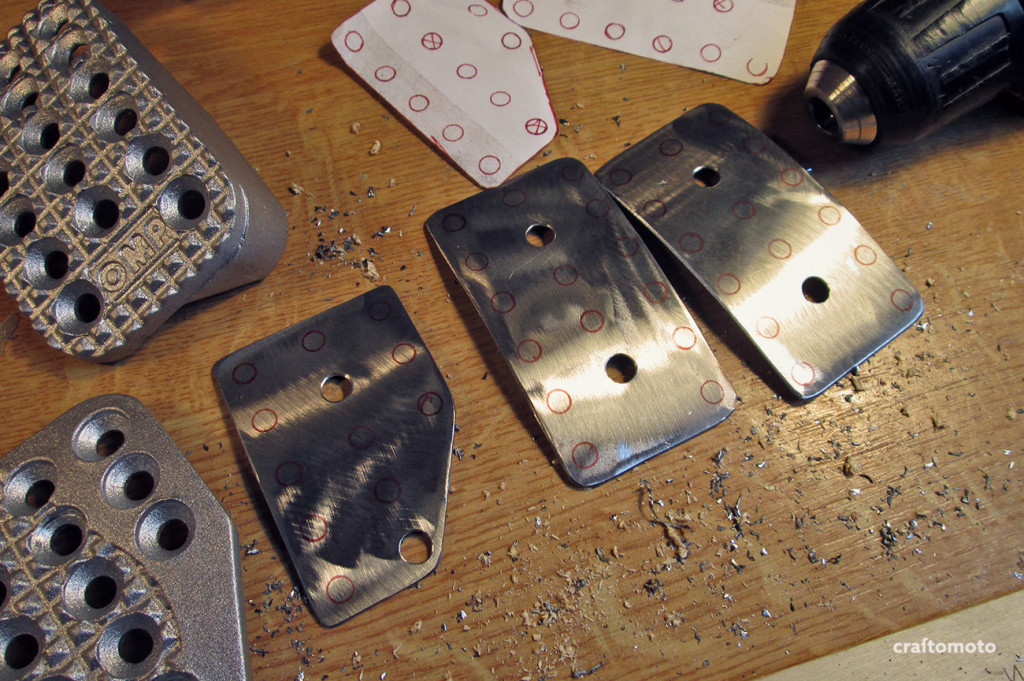 Next step was to fabricate the back-plates. That will stop the dimples from moving backwards. 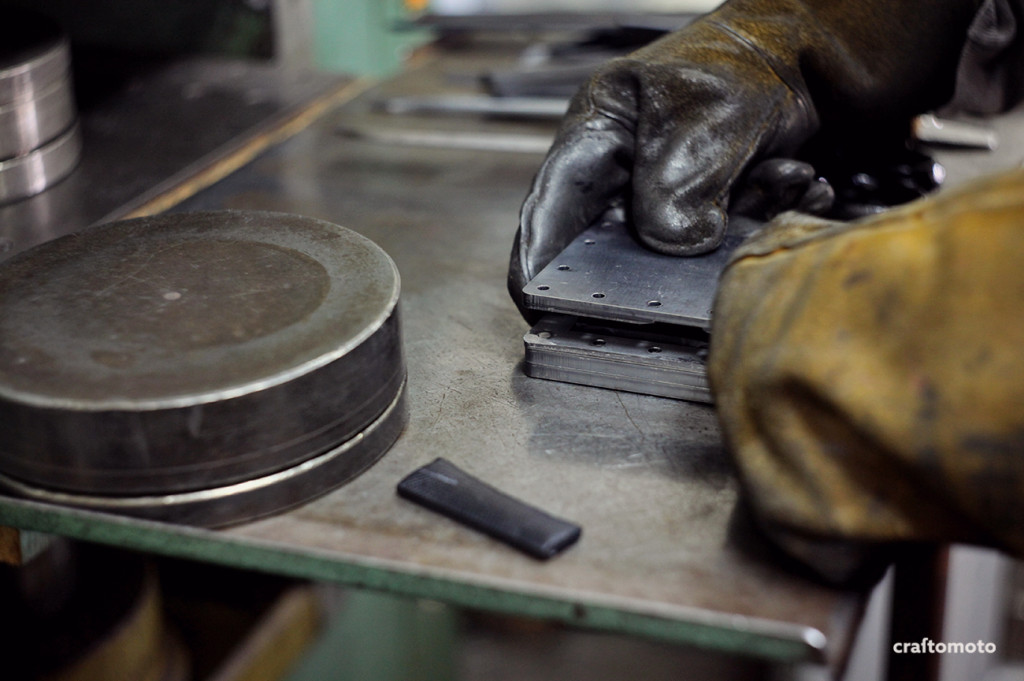 In the molding shop raw rubber was placed in the mold. 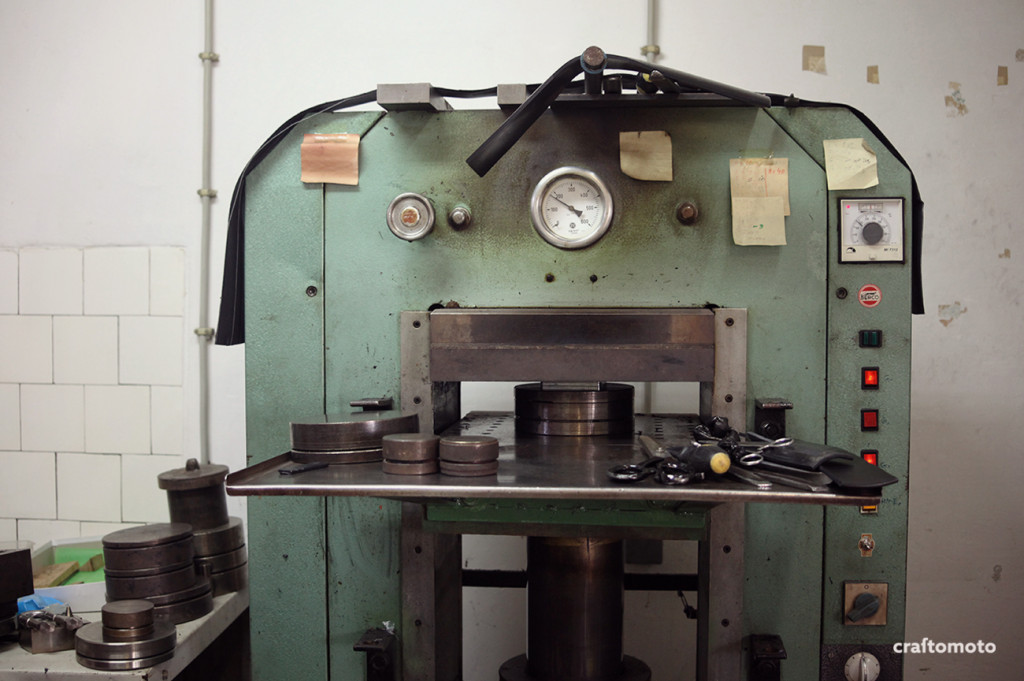 And then put for a couple of minutes in a heated 200bar press.

Final product after removing from the mold. 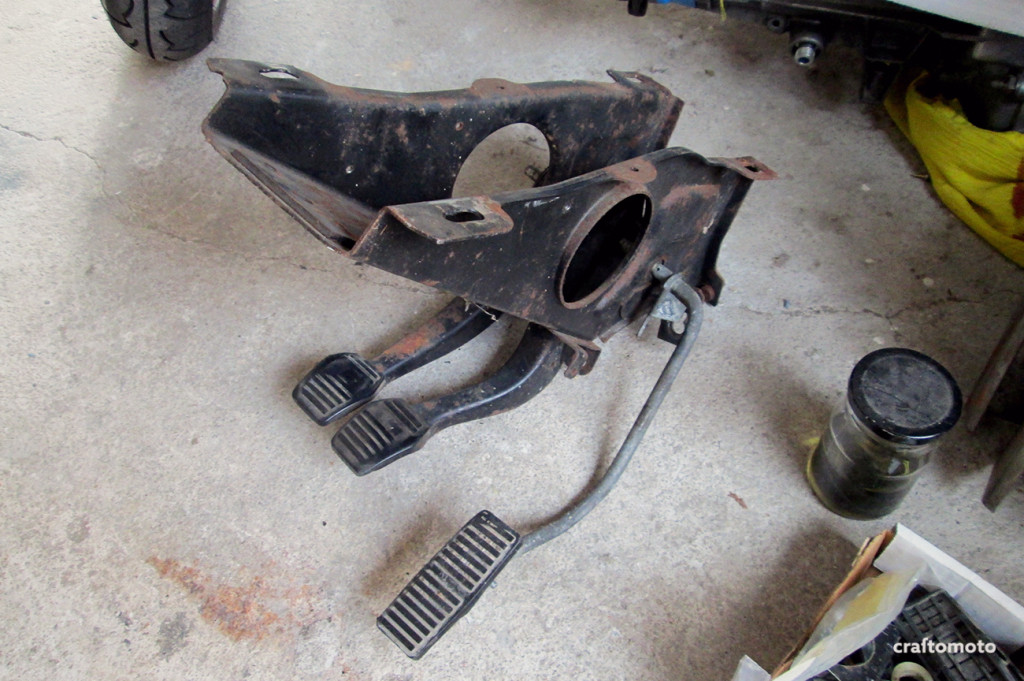 Pedal levers after 45 years were not in great shape, as you can see.

I had two sets, so I decided to sandblast and powder-coat them both. I noticed one thing. Those two sets were slightly different, event though they both were MK1. Some spacing was different, also the brake lever on one of them was reinforced. But the most interesting bit is that the clutch lever on one set has slightly longer clutch lever where the cable connects. So I presume that would effect the clutch travel and also the clutch operating force.

All the bits cleaned and the main shaft zinc plated. 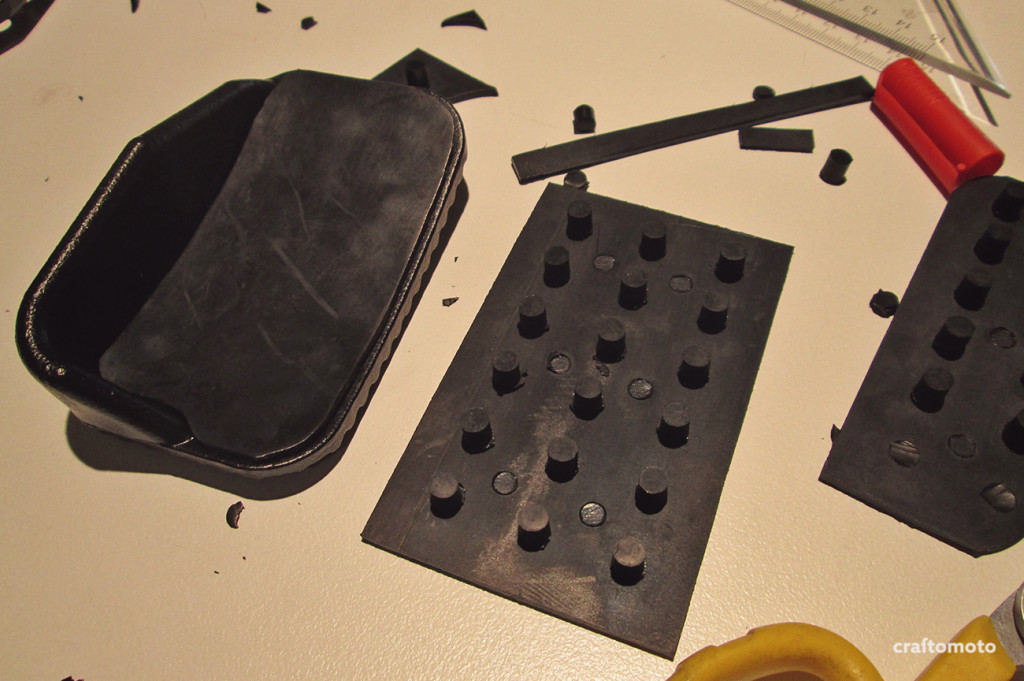 The next step was to cut the dimple plates so they fit inside the pedal. 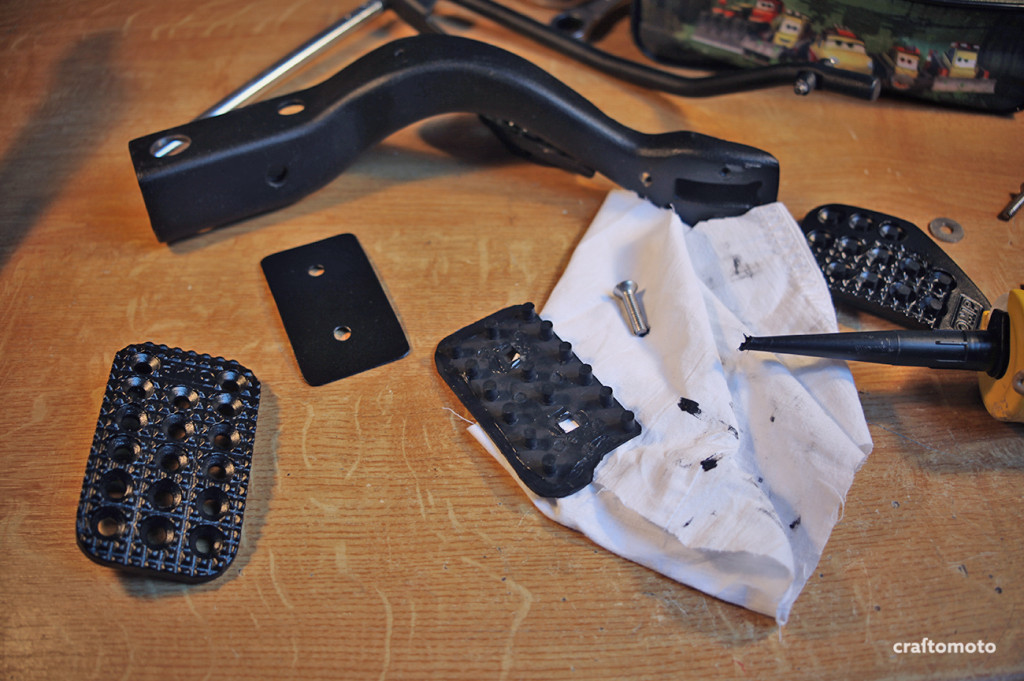 I had pedals sand blasted, chemically prepped and than powder-coated with epoxy based powder for the maximum durability. The same thing was done for the back plate. Also for joining everything together I used flexible black glue. 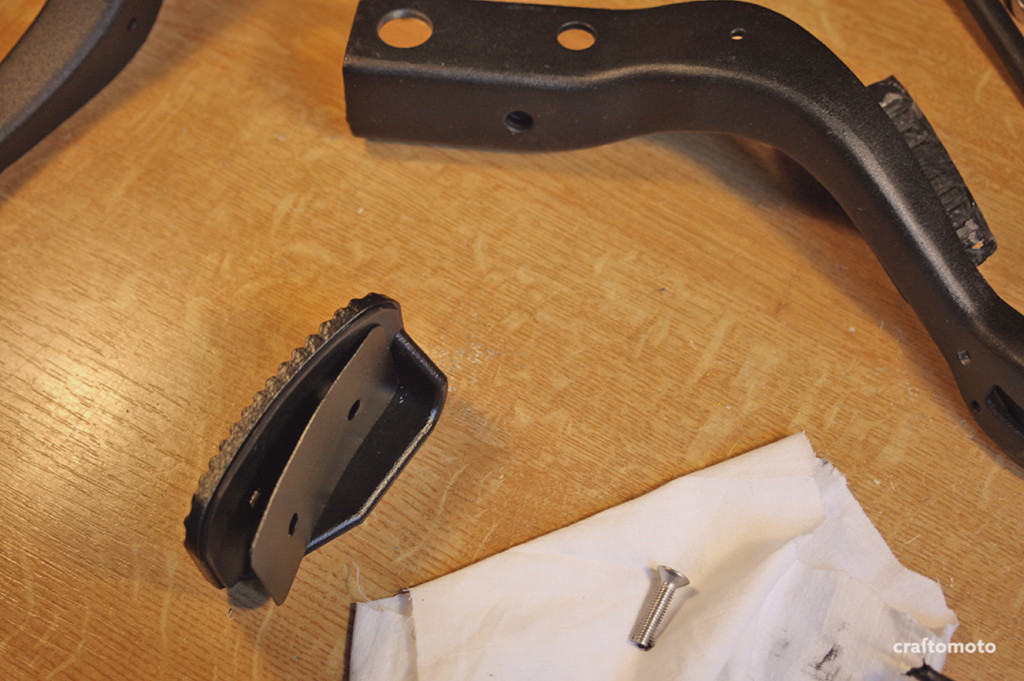 Multi layer sandwich combination – here you can see the location of the back plate.

Also, after it was bolted, I filled the gaps with black polyurethane glue. When it sets it’s basically rubber.

I love to test my theories and projects so I filled the tip of the shoe with the metal blocks and measured the needed force after it starts to move, so I can see if they produce more or less friction, both on dry and wet shoes, OEM pedals and OMP pedals. And while those numbers are only for this test and setup relevant, I can share some of them here: 6N is needed to overcome friction on OEM pedals and 7N on OMP when dry, 5N OEM and 6N OMP when wet. Also, OMP pedals have those ridges so that will also help of the shoes are muddy or something.

Back view, the stainless steel bolts and nuts were also tightened with a drop of a thread locker. There’s also a centering spacer on the bottom bolt, so everything is aligned perfectly. 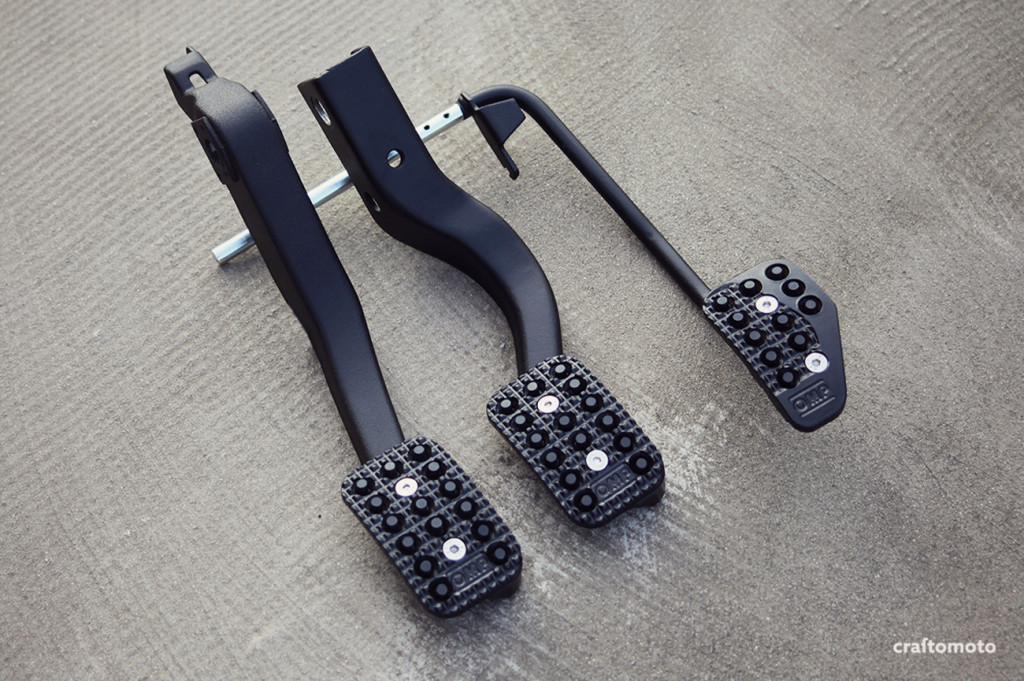 The top rod has been zinc-plated, because if it was powder-coated, it would be too thick to push through the plastic bushing. 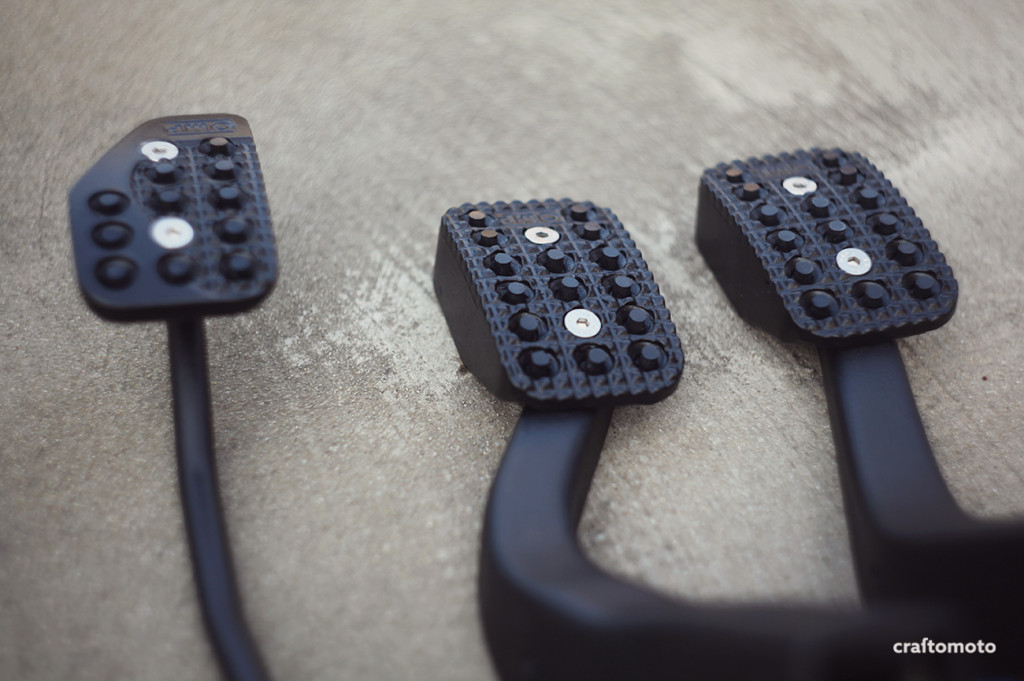 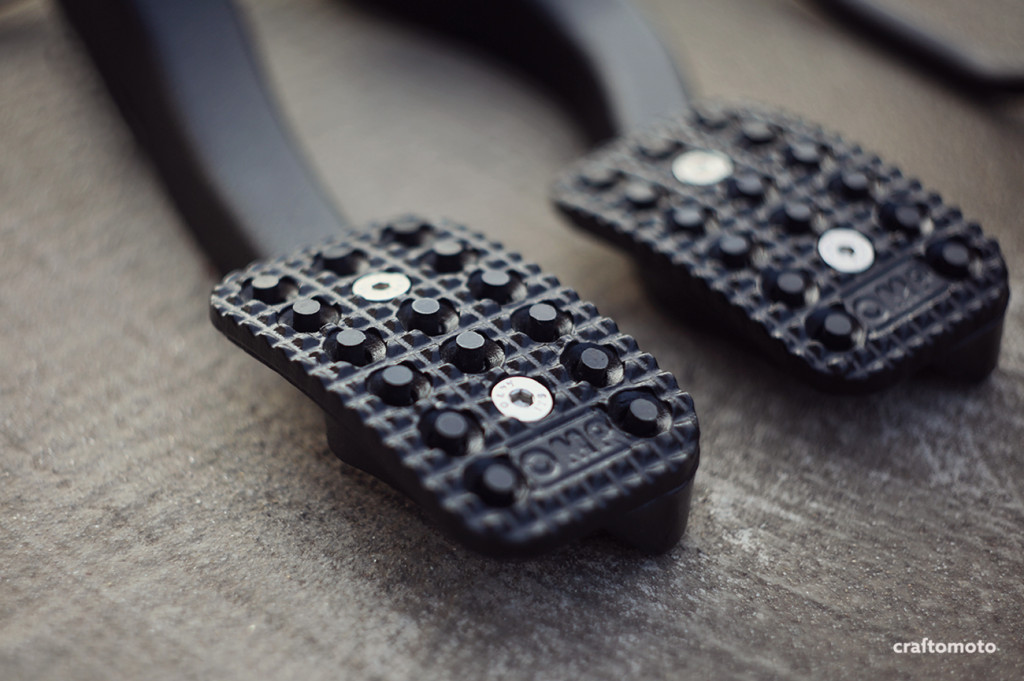 All ready for the installment. I think they turned out nicely.