According to titles in the media, it may seem like we’re going through the incarnation of the movie The Day After Tomorrow. Freezing cold, temperatures below zero, snow and all that stuff. When we were kids, this was just called “winter”, now we have the red zone alerts all over the news. Anyway, such cataclysmic weather conditions seemed good enough to take a road trip to Kumrovec, located in Hrvatsko Zagorje. 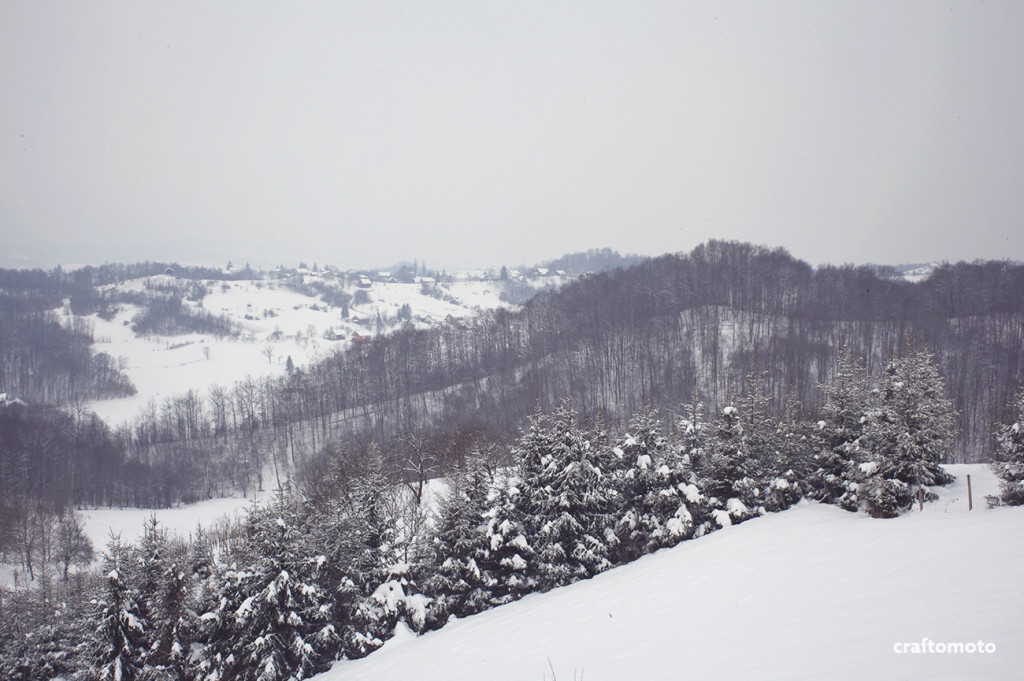 This was actually a birth place of a former Yugoslavian president Josip Broz Tito, which is located in the middle of the ethno-village “Staro selo” Kumrovec, the largest traditionally decorated area in Croatia, which gives visitors the authentic look of the Zagorje village from the beginning of the 20th century. Also, and totally unrelated to this fact, there has been a rally race for seventh year in a row, called Rally Kumrovec. 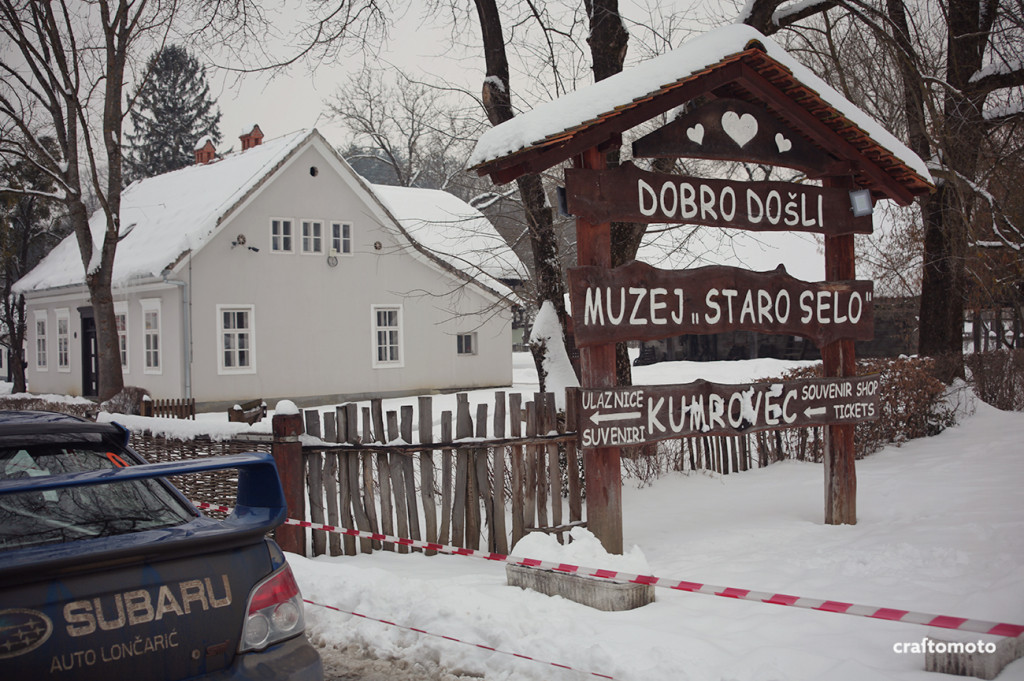 I liked the contrast of this photo – old Croatian village vs. modern Japanese car. Anyway, since my co-spotter Josip’s Alfa Romeo froze in the morning, we were a bit late with a departure, but luckily, managed to make it an hour before the first stage began.

No time to explain – immediately upon the arrival, we jumped into action and climbed on the hill to get the ideal spot for filming. The view on the top was absolutely fantastic, but not all the journalists were crazy enough to go that far on foot, in spite of the view

After digging into the half meter of the snow to get the hard surface for positioning the photo stand, Josip and I got into the positions. It was freezing cold, but that’s no excuse not to wear a stylish hat! And yes, since Josip doesn’t have a photo watermark, we were free to designed it on our own and put it on every photo he took 😀 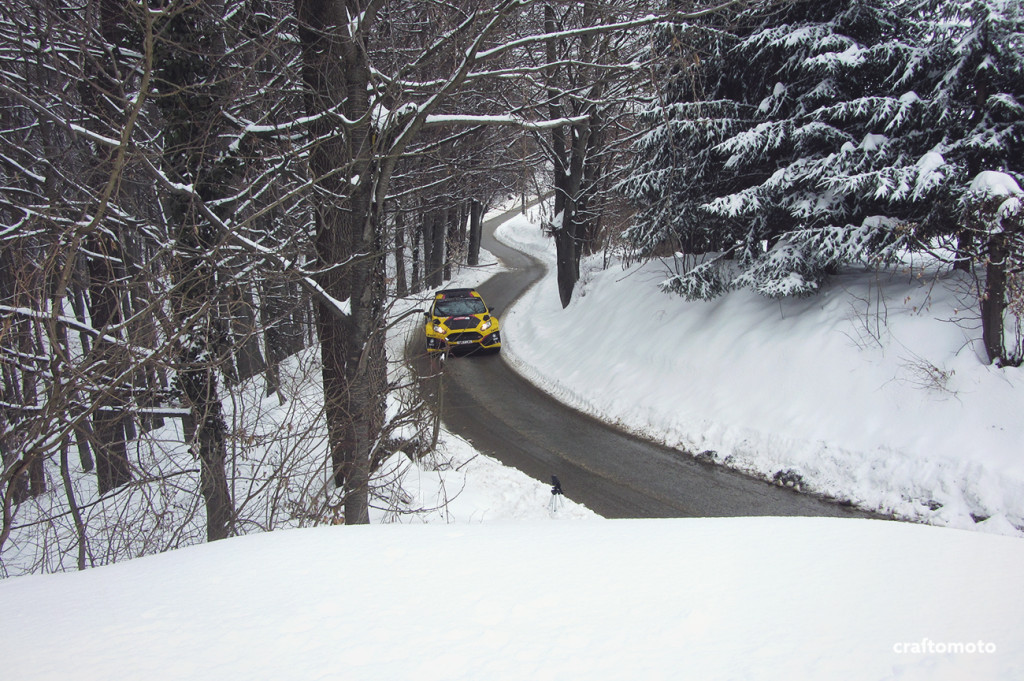 It wasn’t long before the cars started hurling by.

There were a few local spectators on the top of every hill as well.

After the first stage finished the race, we had limited time to find a new position.

And now this story gets a turn, because we didn’t get so far from there.

It turned out that those locals we spotted on the hill have a wine cellar, so they invited us for a cup of wine and homemade meat products

People from Zagorje are always very friendly hosts, and anyone’s visit is a great opportunity eat or drink. So, when in Zagorje… 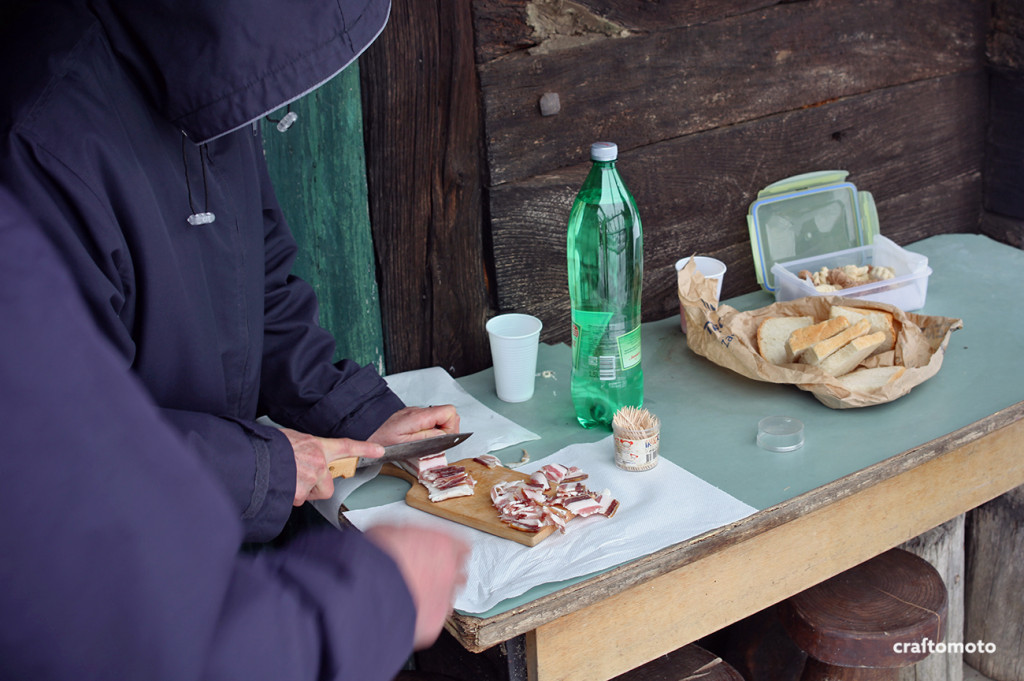 With some food in our belly and wine in a cup, we remembered that it’s important to get on a new location, so we said goodbye to the locals and went on.

We managed to walk maybe a kilometer, before we were kindly invited by another party for a glass of gemišt (spritzer). In Croatia, it’s not polite to refuse such an offer, so we got refilled, took a photo, and continued our climbing over the hills. 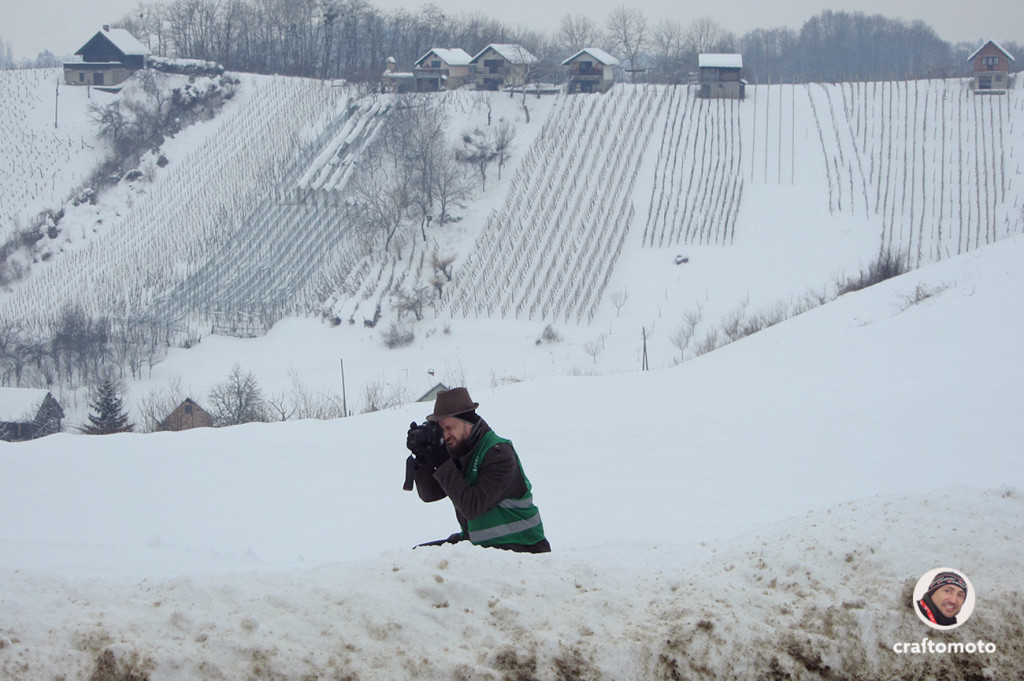 First you dig a hole, and then you get in there 😀 It’s not easy as it may seem. 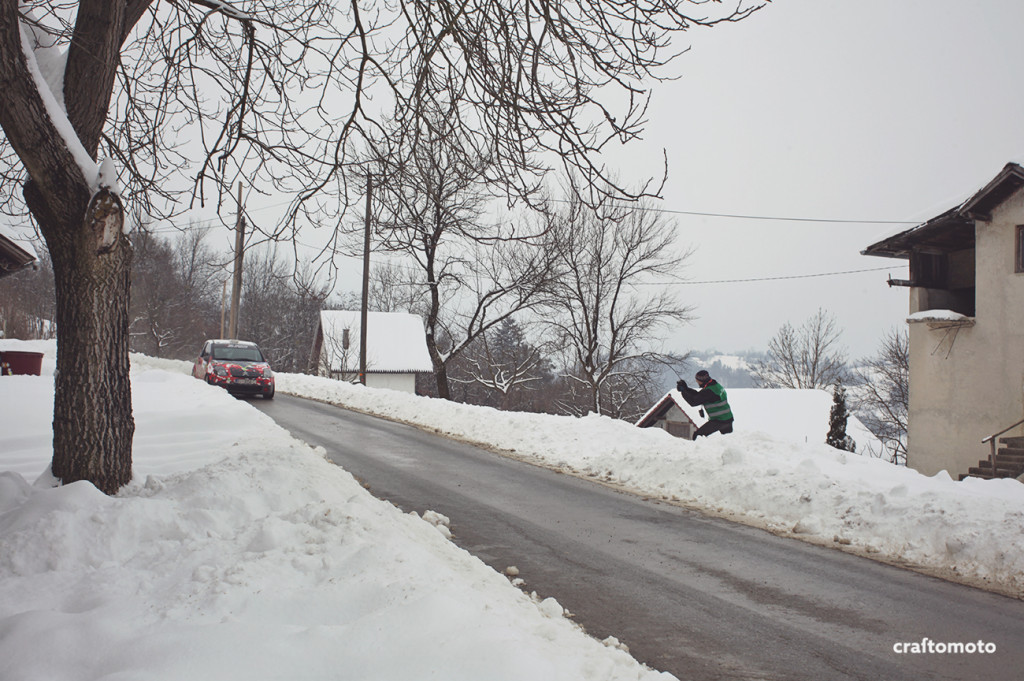 Josip was covering the other side of the road, of course.

This location had more straight path, so cars were traveling much faster.

Eventually we moved 20 meters further to somebody’s backyard for a better shot. And again, by the end of the stage we got a new offer.

We asked the owner if it’s OK to film from his yard, and since I was still holding the cup of wine, mister Preglej invited us to check out his wine cellar and to sample his award-winning wines.

And Mr. Preglej wasn’t joking, the wine was fantastic.

This sight is very common for rural areas, where people still make their sausages and other meat products – they are incomparable with those you can bought in the store, but that’s whole another story. 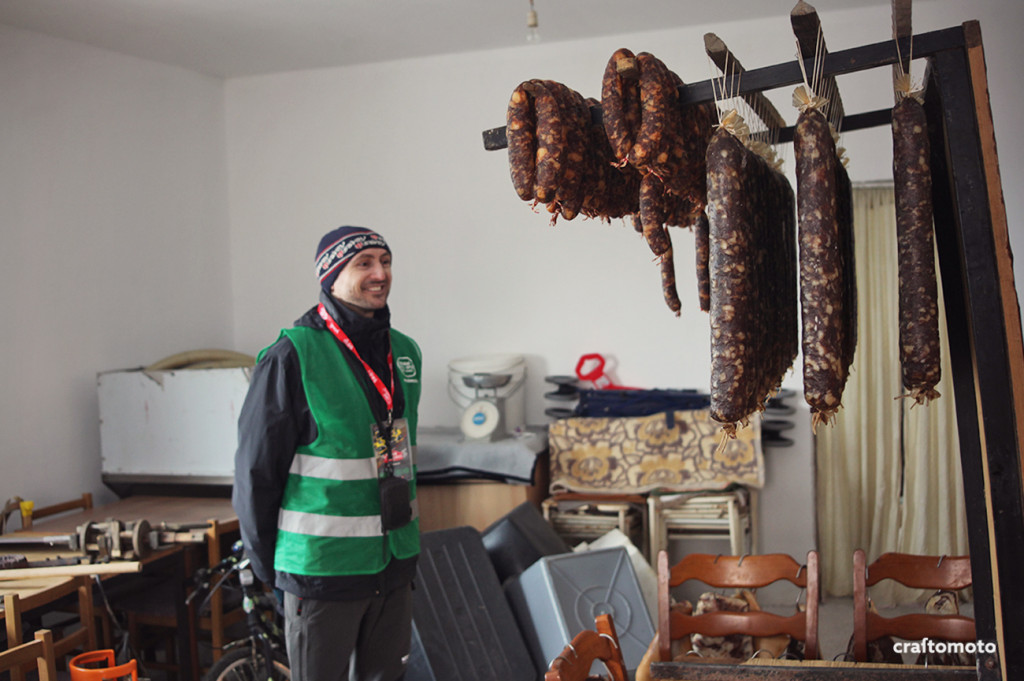 Anyway, Josip being from Slavonia, knows a thing about sausages, so he was happy to exchange secret methods and technique of the sausage making craft. Just look at his face. 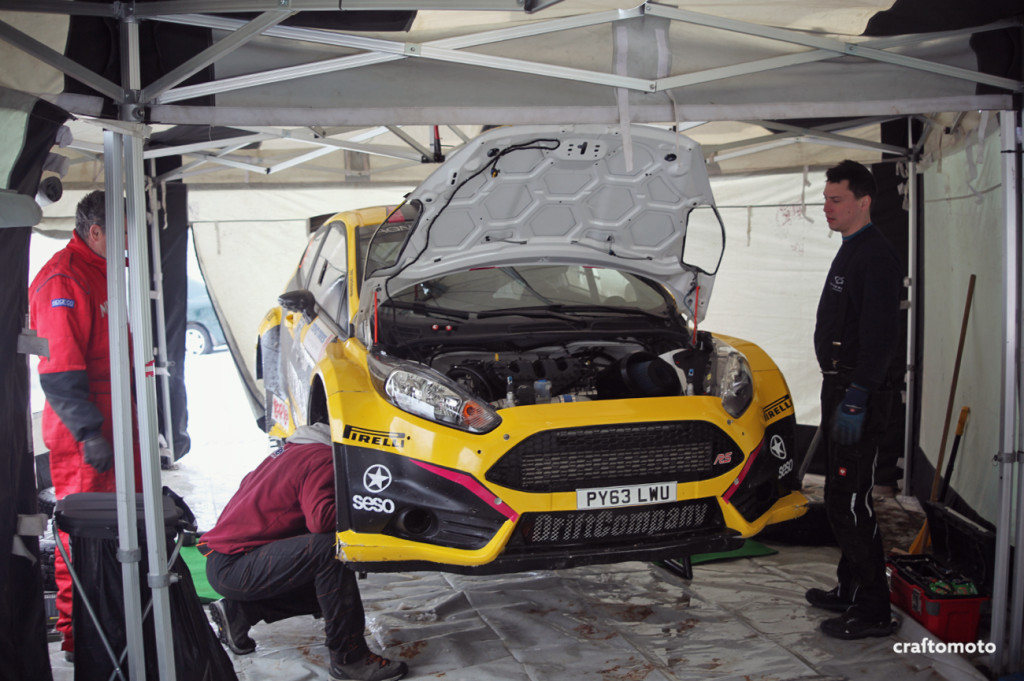 Back to our mission – during the break after the second stage, we managed to sneak into the box of Mayr-Melnhof and Thomas Zeiser, where they were preparing for another round of racing, together with the rest of the team.

This was one of the cars that had some serious rally mechanics going on. 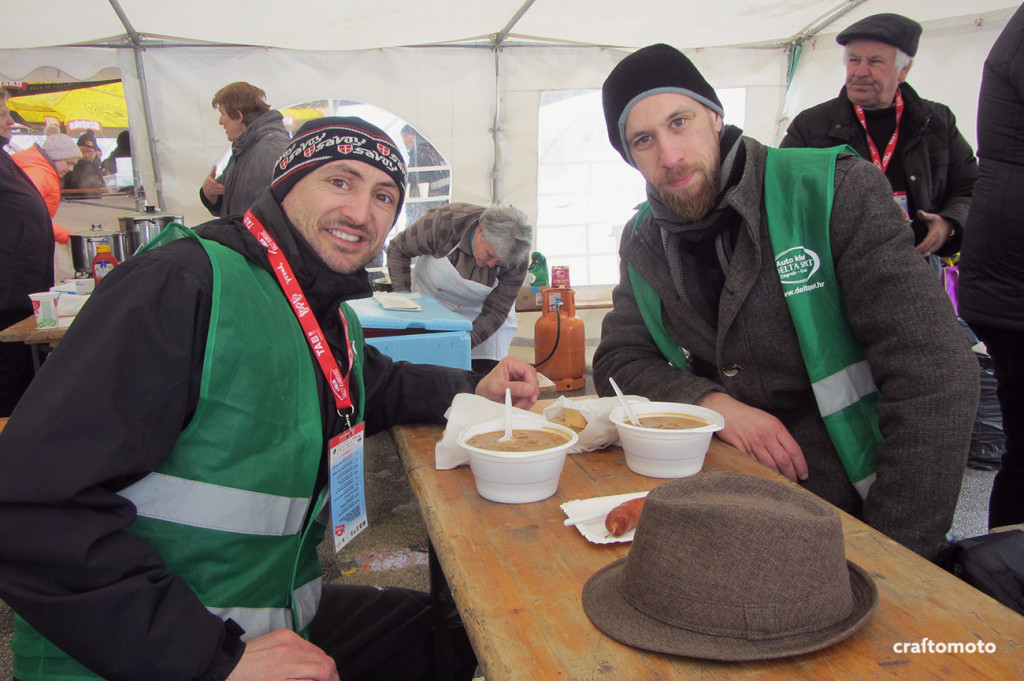 And then it was already time for a lunch break, so we decided to go in tent where they were serving food. You’re probably wondering what we were drinking. No, you didn’t, but let me tell you anyway. 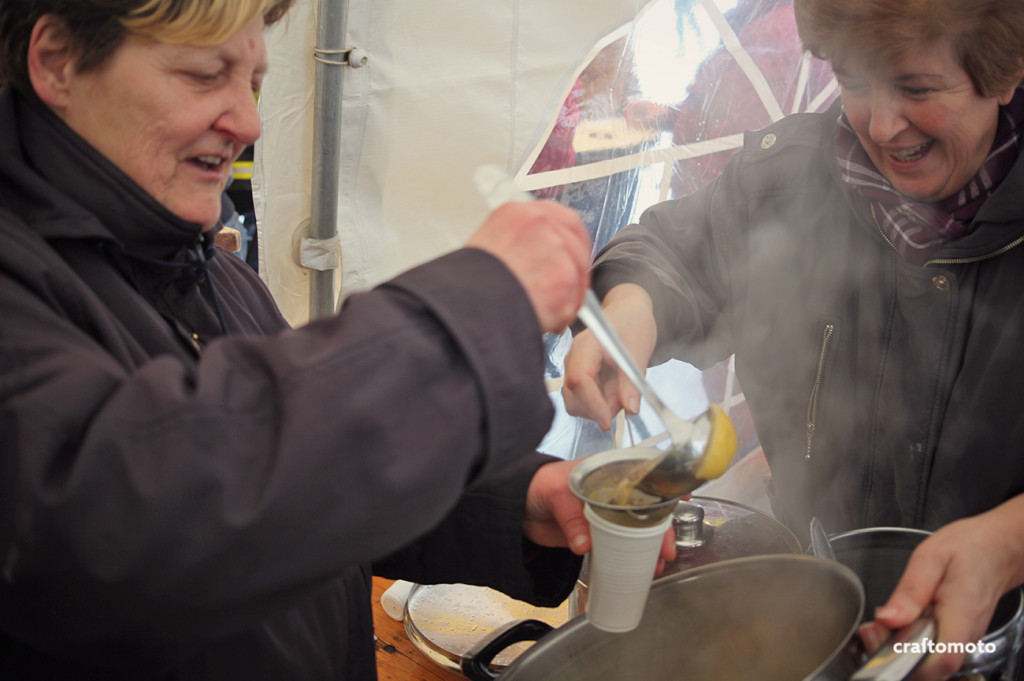 This is mulled wine, but with addition of fruits – I have never tasted this particular combination, but I’m recommending!

Ladies who were working there were kind enough to save the very last portion for us, as you can see 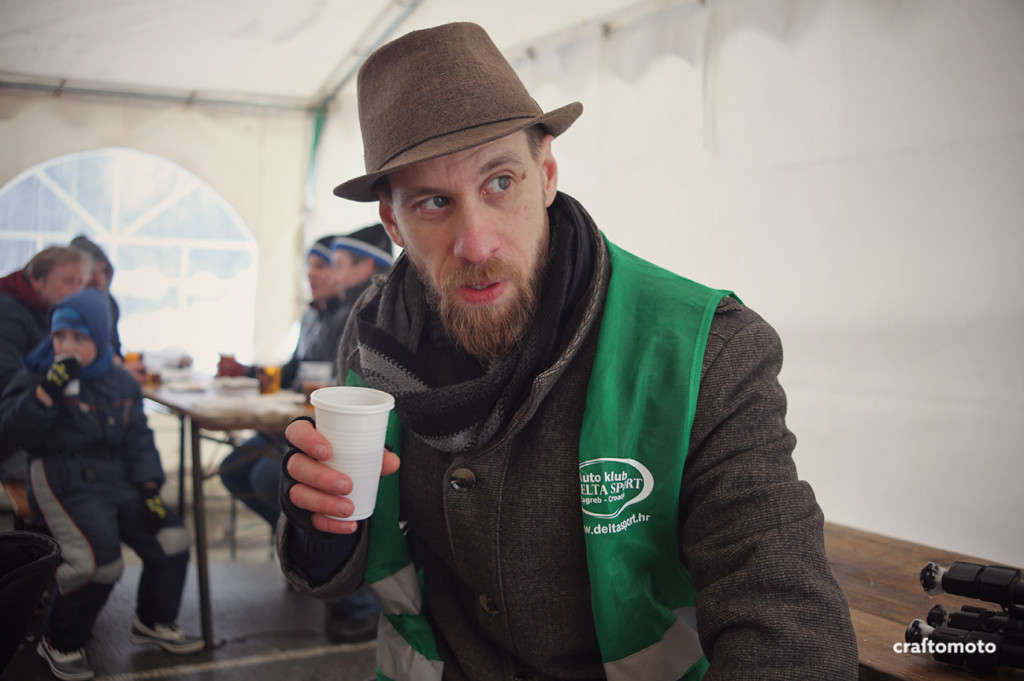 If this is not a satisfied face, I don’t know what is 😀

After the lunch, we were not in the mood to climb like crazy anymore, so for the last stage we decided to stay at the start of the rally…

…while other cars waited in line for the start. 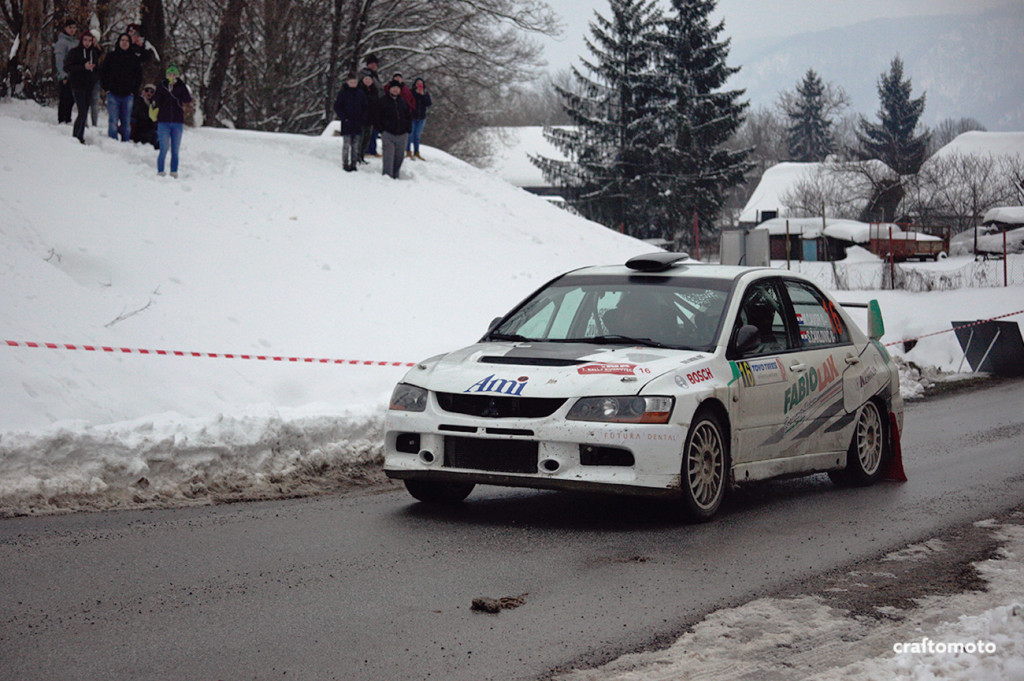 There were few nice launches… 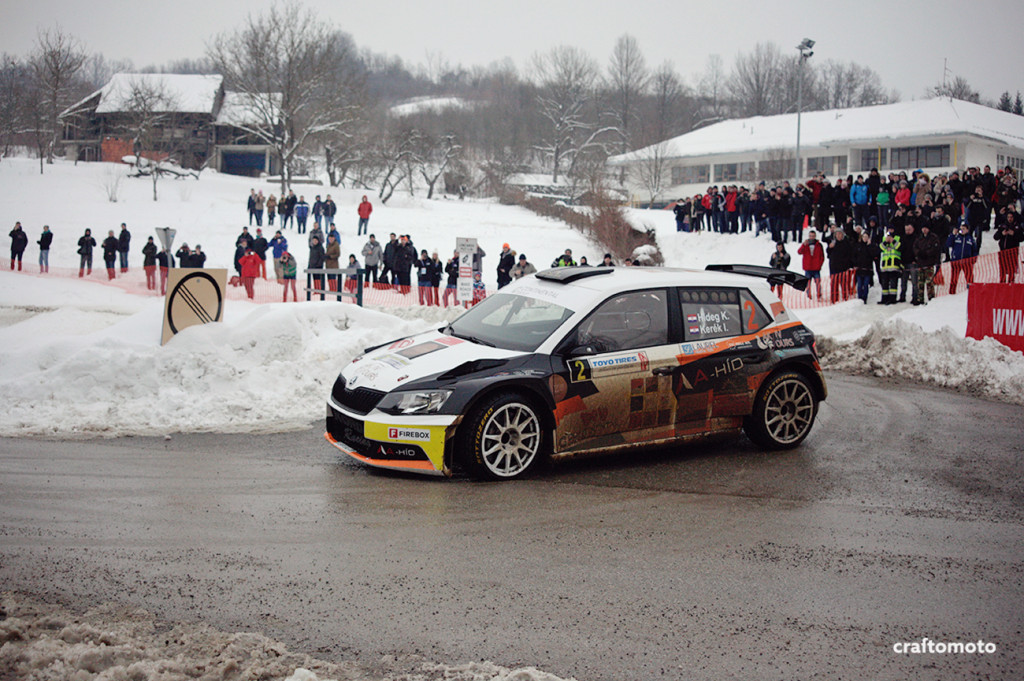 …and some nice slides while entering almost 90 degree turns.

So, after the last stage finished, we decided to call it a day, and went back to “Staro selo” for a quick look at a beautiful scenery.

To be honest, I could still use some of this tools, for my leather escapades.

At the main square, the cups were already prepared.

We’ll conclude this post with a photo of rally Alfa Romeo, just because of Josip, ’cause he’s a fan of the particular brand. Also, this was the only Alfa Romeo in the rally, so he didn’t stop talking about it all day.

Btw. Josip, did you know that Ford won this rally, just saying

Our trophies. A day well spent. You can see a short video about the whole experience here:

Here’s also the uncut version of the rally race: